Started the day with a Caramel Macchiato and am ending the day with a Caramel Macchiato...a @southernpinesbrewing Salted Caramel Macchiato Stout! Dusted off the @fizzics_beer for the occasion! Could have sworn it was on Nitro! Love the wonderful caramel nose with a hearty coffee flavor compliments of @cactuscreekcoffee! This was a great way to end the weekend....and honoring those who sacrificed their lives so we can enjoy the freedom that we have. Thanks to all who have served! . . . #stout #stoutwhisperer #properglassware #fizzics #fizzicswaytap #southernpines #caramelmacchiato #weekend #monday #memorialdayweekend #northcarolina #nc #flag #coffee #cactuscreekcoffee #pinastout #picoftheday #photooftheday #quarantine #stayhome #cantastic #dulcedeleche
I just wanted to enjoy a wonderful consistent no surprise bourbon barrel aged Stout so I went back to my standard....@gooseisland Bourbon County Brand Stout and the 2019 vintage certainly didn’t disappoint! Love the pair of tasters I got this week! Tough to beat BCBS for Stoutstanding BA Stouts! Stay safe and enjoy the long weekend and please remember those who perished so we can enjoy our freedom! . . . #stout #Stoutwhisperer #beer #craftbeer #instabeer #beerstagram #weekend #sunday #stoutsunday #sundayfunday #chicago #ord #illinois #gooseisland #bourboncounty #quarantine #stayhome #staysafe #properglassware #memorialday #memorialdayweekend #pinastout #picoftheday #photooftheday #remember #coronavirus #covid19 #socialdistancing #bourbon #barrelaged
Mrs. Stoutwhisperer and I are celebrating our 33rd anniversary today! I thought that @perennialbeer Fantastic Voyage was a perfect Stout to commemorate and celebrate today! It’s certainly been a fantastic voyage for 33 years and its amazing that she has put up with me for all these years! Here’s to 33 more...by the way, this Stout is a tasty one as well! Not a lot of direct coconut, but the sweetness balances it out. Very enjoyable! Happy Anniversary to Mrs. Stoutwhisperer! Love you! 🥰 . . . #stout #stoutwhisperer #beer #craftbeer #properglassware #perennial #stl #stlouis #missouri #anniversary #instabeer #beerstagram #fantasticvoyage #coocnut #weekend #saturday #happyanniversary #cantastic #quarantine #pinastout #33 #33rdanniversary #staysafe #perennialartisanales #photooftheday #picoftheday #beerpics #holidayweekend #memorialday
The long holiday weekend starts with the just released 2020 vintage of @burialbeer Seasoned Skillet Stout! Wonderful aroma and taste notes compliments of @counterculturecoffee! Hints of bourbon barrel aging provide the balance to make Seasoned Skillet a must have Stout! A tasty way to start the Memorial Day weekend! Stay safe! . . . #stout #stoutwhisperer #beer #craftbeer #properglassware #burialbrewing #nc #northcarolina #asheville #avl #dtr #raleigh #weekend #friday #seasoned #skillet #donut #counterculture #coffee #bourbon #barrelaged #quarantine #stayhome #memorialday #3dayweekend #brew #pinastout #beerpics #picoftheday #photooftheday
While all eyes are on @darlingtonraceway and the return of @nascar, my tastebuds are on @13stripesbrewery and the 2018 vintage of Olde Soul! The carbonation may have diminished (which is fine by me), the rum barrel and cinnamon notes and the heat from the cayenne and ancho peppers are wonderfully present! One of my favorite Stouts! A great way to enjoy a Sunday afternoon of racing. So glad to have some real sports back! Kudos to @springsteen...driving in to Darlington County.... . . . #stout #stoutwhisperer #beer #craftbeer #properglassware #13stripesbrewery #sc #nascar #darlington #springsteen #weekend #sundayfunday #sunday #stoutsunday #taylorssc #taylorsmill #oldesoul #beerlabels #nascaronfox #rumbarrelaged #cinnamon #pinastout #beerpics #picoftheday #photooftheday #beerphotography #cayenne #ancho #greenville #gvltoday
As the self proclaimed east coast ambassador for @smogcitybeer, I’m celebrating the 9th anniversary of Smog City! Congratulations to Laurie and Jonathan! Love your Stouts! Really enjoying the 2020 vintage of the Coconut and Vanilla variant of Infinite Wishes! The strong vanilla notes and sweetness of the coconut brings a wonderful balance to the base barrel aged IW! Really went down smooth as I smoked some baby backs for Traeger Day! Today was a good day! Happy Anniversary to @smogcitybeer! Swipe for more pics! . . . #stout #stoutwhisperer #beer #craftbeer #properglassware #smogcity #infinitewishes #coconut #vanilla #bourbon #barrelaged #california #losangeles #lax #weekend #saturday #anniversary #9th #traegerday #smoking #babybackribs #pinastout #pictureoftheday #photooftheday #beerphotography #brewtography #craftbeerphoto #socal #beerporn #photo

While our President-elect may have written a best selling book about dealing, my guess is that he wasn’t talking about trading craft beer…..and this is the topic for today’s blogpost.   Trading beer is an art and a science;  it’s an art in the fact that one needs to know when to say yes (or no) and it’s a science in understanding what the current value is for the beer you are trading and the beer you are trading for.     Some beers have higher values due to their scarcity or newness; some have higher values due to their name/brand/reputation. 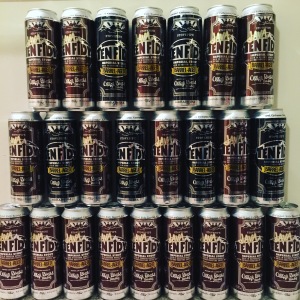 While I knew these were quality Stouts, I also knew they would be good Stout Currency in the world of trading, as these were relatively rare due to their quantity and availability.

Over the course of the last 3 weeks, I have been able to turn 11 Java BA TENFIDY, 11 BA TENFIDY, and 2 bottles of Dark Arts into:

and with some additional help from my inventory, I was also able to acquire:

Needless to say, I’m really pleased as to what I’ve been able to acquire and I believe my trading partners have been pleased as to what they’ve received from me!  I’m a big believer of dollar for dollar trading (known as “$4$” in the trading world), meaning that the trade should be equivalent in terms of money spent.  The only caviat to that is knowing what stouts are more rare or are in high demand – which may require a bit more to close the deal.  That’s where the art comes in….knowing when to add a bit more to seal the deal and knowing when to walk away from a trade when someone is asking too much for the trade.  I’ve walked away from trades and I’ve also knowingly overpaid because I really wanted to acquire a Stout that’s been on my want list for a long time!  But that’s OK….it’s only beer!

As in any trade or negotiation, there is the thrill of the chase and the excitement of closing the deal.  However, once the deal is sealed, reality sinks in and the downside of trading rears it’s ugly head.  Besides having to pack the beer well enough to withstand a nuclear blast, the cost of shipping…..whether it’s UPS or FedEx, shipping is not cheap.   I guess I rationalize the cost knowing that it’s usually close to a wash between what I pay for shipping and what my trading partner has to pay.   That being said, shipping costs do add up after a few trades and one must consider whether it’s worth it.  In fact, I’m leaning toward more in-person (IP) trades moving forward.   A couple of these trades were in person and it was great to not deal with packing and the shipping costs and I got to meet some other local craft beer traders.  It’s just a matter of finding local trading partners who have access to those non-local or rare Stouts that I am seeking.

How does one get into trading?  The number of online trading forums are many; I lean toward the Beer Advocate forum but there are many others – Reddit, TalkBeer, and on Facebook, there is the Rare Beer Seekers page along with a good number of local craftbeer pages that encourage and facilitate in person trading.  It’s a pretty straightforward process – you either post your wants (ISO=In Search Of) and what you are willing to trade (FT=For Trade) or you scour the posts to see if there is something you can accommodate.  Then you either receive a DM (Direct Message) or you initiate one to start the trading dance.  Then it’s all about time and patience…..and it either consummates in a deal or you move on to other opportunities!

Do you have any trading tips?  What’s your best or worst trade?  Any horror stories that you would like to share?  We would all like to learn so if you have anything to share, please do so!

Long time readers of this blog will recall my post back in May that reviewed the release of Epic Brewing’s Son of a Baptist, a non barrel aged version of Big Bad Baptist brewed with a assortment of local coffee beans.  Here in North Carolina, we were treated to the version made with Larry’s Coffee.  That was a wonderful stout and a great weekend!

Fast forward to today…..the innovative brewmasters at Epic recently decided to add a couple of members to the Baptist family:
–Double Barrel Big Bad Baptist, where the green coffee beans are aged in bourbon barrels for an added punch of bourbon depth and flavor

The good people at Epic (thanks Matthew!) provided me with an early preview of these relatives of Big Bad Baptist for which I am very thankful for.  I set aside this weekend to sample each and provide my feedback/thoughts.

As always, Big Bad Baptist delivers an amazing taste experience.  This is a Stout that has 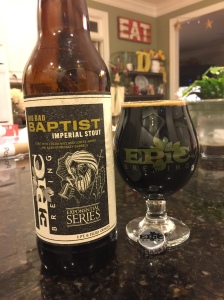 just the right flavor notes.  This release of BBB used the Guatemalan Blend of Blue Copper Coffee which provided a nice smoothness to the overall taste.  While there definitely is a barrel flavor to BBB, there is also a smoothness to it.  The coffee and the cocoa nibs really help to balance the taste.  As I’ve said before, Big Bad Baptist is one of my go to Stouts, as I can always count on it’s amazing taste and consistency.   It’s one of my baseline standard Stouts and is one that I can count on when I just need that reset as to what a barrel aged Stout should taste like.

Not sure what to expect, but after tasting and savoring the spices and flavors, this is my clear favorite.  I must admit to having a bias toward Stouts with some flavor and spice to 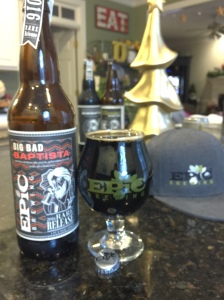 them so it’s not altogether surprising that Baptista had me at hello.  From the first sip to the final swallow, I was mesmerized.  Cinnamon, vanilla, cocoa nibs and coffee notes took over and really captured all of my senses.  Baptista hit all of the right notes for me and I can’t wait to open another bottle!  This was the best of the weekend.

After Baptista, I wasn’t sure what to expect.  DBBBB 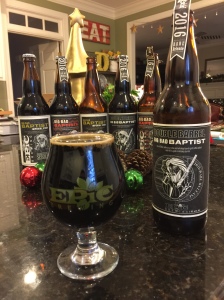 differentiates itself by using coffee beans that were aged in bourbon barrels, adding additional complexity and depth.  I wasn’t sure whether I would be able to differentiate DBBBB from BBB, but indeed I could.  It’s tough to explain, but DBBBB had a bit more “woodiness” to it versus BBB.  It was quite enjoyable to savor this on a Sunday afternoon watching NFL RedZone.   DBBBB engaged me and is a worthy relative of BBB!

That’s the beauty about the art and science of brewing Stouts.  The variations of coffee, cocoa nibs, malts, and other added variants can make such an incredible difference in the nose and taste of a Stout.  Throw in the variations of barrel aging – the type of barrel (bourbon, scotch, rum, wine, tequila), the distiller and the time spent in the barrel all also impact the depth of flavor and the taste.  Some have a wonderful smoothness to them, others have a bit of a bite to them which tend to mellow over time.

The brewmasters at Epic certainly seem to have the recipe down….they stay true to what makes Big Bad Baptist so successful yet are willing to venture out and introduce us to others in the Baptist family.  Usually there are some bad apples in every family, but as far as I’m concerned, every Epic Baptist Stout is one that I would seek out!

Thanks to the good people at Epic Brewing, I’ve been baptized again!  Thanks again for the early release and keep up the incredible work!!  I’m already looking forward to my next Epic weekend!!