As I wrote about in an earlier post, the 2 sons of the Stoutwhisperer and I traveled to Asheville for a 21st birthday weekend beercation (albeit a year late!).  We even had the blessing of Mrs. Stoutwhisperer!   One son rode with me and the other met us in Asheville as he was coming from Greenville, SC.  We met at our hotel around 4pm on Friday and immediately called for Uber to take us to Oskar Blues.  We all agreed that we were going to

Uber all weekend; no reason to take any chances.  We took the 25 minute ride to Brevard, NC which is the east coast home of Oskar Blues Brewery.  It’s in an industrial area off the beaten path so I’m glad we were with someone who knew where it was!   We were very fortunate in our planning because it just happened to coincide with the release party for BA TENFIDY and Java BA TENFIDY!  When we got to OB, it was already buzzing and most everyone was walking around with a glass of TENFIDY, BA TENFIDY or Java BA

TENFIDY.  Those who didn’t have a glass were walking around carrying their take home cases of BA and Java BA.  Apparently  the no limits on take home quantities caused issues, although I really didn’t see anyone with more than 2, maybe 3 cases (36 cans).  I

bought 2 cases (3 sixers of Java BA and 1 sixer of BA).  We enjoyed the cool evening meeting new people, enjoying the TENFIDY and having dinner at the OB CHUBwagon.   I had a smoked pork sandwich with 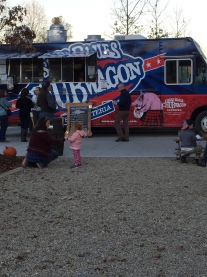 Once we decided to head back to the hotel, we found out that Uber will take us to Brevard, but there weren’t any local Uberer’s that would take us back to Asheville!   Apparently that’s a known fact that our Uber driver neglected to tell us.  We had to call a local Brevard taxi service who was more than willing to take us back to Asheville for over 4X the amount we paid to get to Brevard!  We didn’t have much of a choice so we took it and the cab driver stopped at an ATM along the way because it was cash only!  He was a real character….and I’ll bet he’s laughing all the way to the bank on people like us!    We made it back to the hotel safely and turned in for the evening knowing we had a full Saturday of fun ahead of us!

Saturday started early with an Uber ride to the South Slope district of Asheville, home to the Wicked Weed Funkatorium, Burial Beer, Green Man, Twin Leaf, and Buxton Hall BBQ and our first stop of the day, Vortex Doughnuts.  I read about Vortex as I was planning for

the trip and knew we had to pay a visit.  Homemade doughnuts with some creative flavors was right up our alley.  We each had a couple of doughnuts and a beverage…..very tasty and a great way to start a cool Saturday!

We had a few hours to kill before the breweries opened (11am), so we decided to walk to the River Arts district, home of some amazing artists, and a couple of breweries, Wedge and New Belgium.   The artist studios were just opening up and so we stepped in and started to look around.  We came upon one artist, Stephen Lange, who was more than happy to spend some time with us and talk about his craft.  I really thought that the time we spent with him was the surprise of the weekend!  He spoke to us about his technique, his business, and his client base.  It was really neat to hear the passion in his voice about his work.  Take a look at his website!

After the cultural portion of our weekend ended, we wandered over to New Belgium Brewery, 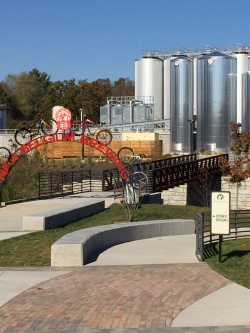 hung out by the river, and waited for them to open up.  Right at the stroke of 11, they swung their doors open and a group of about 20 of us walked in.  Each of us selected a flight of 4 tasters to sample the various New Belgium offerings.  New Belgium really doesn’t have a Stout program, so I wasn’t expecting anything to floor me.  I was wrong. 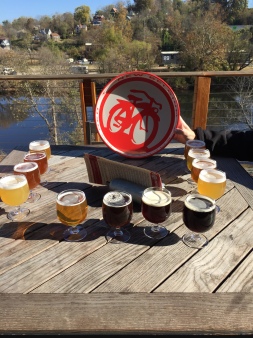 My 4 tasters were: Ben & Jerry Chocolate Chip Cookie Dough Ale, 1554 Black Lager, Anne Francoise Spiced Dark Ale, and a Cherry Felix Sour.   The Ben & Jerry Ale really did smell like Chocolate Chip Cookie Dough but didn’t really taste anything special, the 1554 and Anne-Francoise didn’t do much for me, and the Felix Sour…..well let’s just say that Sours are an acquired taste that I won’t be acquiring anytime soon!   Wow!  Just as others probably can’t handle Stouts, I’ll never be able to drink a Sour.  That’s the beauty of craft beer – a taste and style for everyone!    If anything, our time at New Belgium reinforced my love for Stouts!   The people at New Belgium couldn’t have been more nice and their tasting room and patio overlooking the river is a beautiful place to sit, drink, and talk.  The boys had their flights and they enjoyed sampling the different styles and tastes that New Belgium has to offer.  I plan on visiting New Belgium again, but more for the location and the people!

After New Belgium we headed back to the South Slope where we spent the rest of the day.  We went to Buxton Hall BBQ for lunch.  Buxton Hall has been recognized by Bon Appetit

magazine in their September 2016 issue as one of the top new restaurants of 2016 in the USA!  Since it is located right in the middle of the South Slope area that made our lunch decision an easy one!  All the tables were taken, so we took our seats at the bar and ordered up!  A couple of us ordered smoked pork and the birthday son ordered their other specialty, a fried chicken sandwich.  We all really enjoyed our meals and will certainly return again!  But a 1:30 brewery tour at Burial beckoned, so off we went to Burial Beer.

Burial was right around the corner from Buxton Hall and their patio was crowded with locals.  We entered the combined taproom/brewery and were pointed to a long table where the tour would start.  At 1:30, Tim our guide started the tour and it turned out

that we were the only ones there!  So we had a personal tour of Burial!  Now granted, it’s a rather small brewery, but Tim did a great job giving us the history of Burial, walking us around the facility, talking about the future plans of Burial, answering our many questions, and allowing us to sample the offerings that Burial had on tap that day!  We all really enjoyed the visit to Burial and we’ll definitely keep an eye out for their releases.  I was already a fan of Burial through their limited Skillet Donut Stout release but the boys are now fans as well!

After Burial, we walked around the area, stopping by Green Man and Hi-Wire.  Unfortunately, one place I wanted to go to, Twin Leaf, was closed for a private event.  So we continued across the street to Wicked Weed’s Funkatorium, their hallowed location 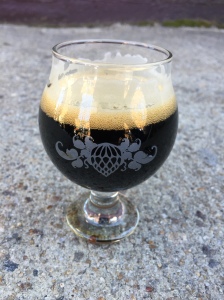 for their Barrel-Aging programs.  Not surprisingly, I stayed away from their Sours, but I grabbed a sample of their Dark Arts Espresso stout.   It was much, much sweeter than I expected!  Definitely a sipping desert drink!  I also bought a couple of bottles of Dark Arts to go.   The boys wanted  to visit the “original” Wicked Weed, so we walked the half 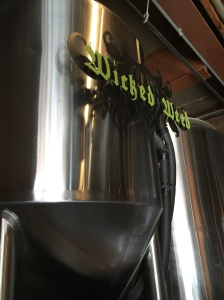 mile or so to the taproom.  It was really crowded but we were able to get through the line quickly.  I got a glass of Dark Ages and was able to wash away the last remnants of my earlier Sour and quench my stout thirst and we watched college football on the multiple screens.  After that, we Ubered back to our hotel to freshen up, drop off our purchases from the day, and then took the hotel shuttle to Sierra Nevada for the evening.

Sierra Nevada is the Taj Majal of breweries in the Asheville area.  It is a huge facility near the Asheville airport and similar to New Belgium, it is their east coast brewing location.   They have a full brewing facility, a large restaurant, a

separate taproom, a huge ‘backyard’ with a large firepit and chairs all around, a few large conference facilities…oh, and a very large gift shop.  In short, an entertainment complex for the craft beer aficionado!

I attempted to register online for a Sierra Nevada brewery tour a couple of weeks prior to our trip but they were sold out far in advance.  Word of advice, if you are planning a visit to SN and want to tour their facility, check their online scheduler first.

Once we entered, we walked around in amazement.  The

copper tanks, the fire pit, everything just overwhelmed us in comparison to what we saw earlier in the day in the South Slope.  There was a Master Brewer’s conference being held there, so it was perhaps more crowded than normal.  I enjoyed (perhaps too much) a

couple of glasses of Sierra Nevada’s signature Stout, Narwhal, and then we grabbed a great dinner there.  We then spent some time around the fire pit watching the flames flicker in the dark, and then we called the shuttle to return us to our 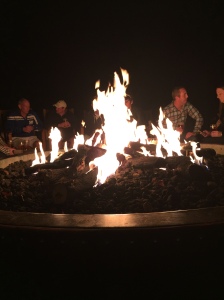 hotel.  A full day of the Asheville craft beer scene in our heads and a satisfying combination of great beer and great food in our bellies!

The next morning was an early wake up call as an English Premier League soccer match between Arsenal and Tottenham was on.  For the uninformed, Arsenal and Tottenham are fierce London rivals as their stadiums are very close to each other.  No matter their records, it’s always a contentious soccer match.  We were hoping to watch it at a local establishment or hook up with the local Arsenal fan club (the Asheville Gooners), but we weren’t able to find anywhere that would open for a 7am kickoff.  So we grabbed breakfast at the hotel and watched the game in our room.

Once the game finished, we checked out and headed back to Raleigh and Greenville to enjoy our Sunday afternoon and get ready for the week ahead.  Many thanks to our Uber drivers, the Clarion Inn-Asheville Airport, and our many acquaintances and new friends at the breweries and eateries we visited.  I know we had a great time in Asheville and are planning a return visit sooner than later.  If anyone is interested in learning more about our visit or would like some additional recommendations….or if you have any recommendations about our next visit,  drop me a comment and I’ll be sure to reach out to you.

One thought on “The Asheville Stoutcation!”