As I was peering into the Stout House (my beer fridge) to decide what I wanted to taste and review, this Christmas BOMB! seemed to call out to me.  I was in the mood for a spicy, 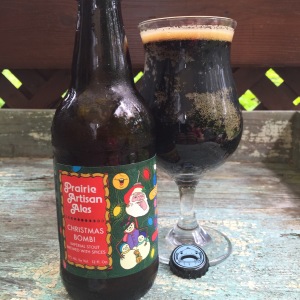 thick Stout so it was a perfect match.  Little did I know that I was celebrating both Mothers Day and the 3rd birthday of BOMB!   Our friends at Prairie Ales just posted a blog commemorating the BOMB! birth and announcing the distribution of Birthday BOMB!  Birthday BOMB! is the wonderful Stout that we all know and love with some homemade caramel added to the brew.  Word has it that it has been seen out in distribution and will hopefully be in your area soon.  I for one am looking forward to celebrating the birthday of BOMB! with a Birthday BOMB!

As a quick aside, you’ll note the bubbles on the side of the glass.  A keen observer tweeted me and told me that is a sign of a dirty glass!  I always rinsed out my glass after every session so I thought I was good, but apparently its a best practice to rinse your glass prior to a pour as well.  Another lesson learned…..

If you’ve read any of my previous reviews, you’ll note that I’m a BOMB! fan.  I’m really taken by the thickness of this Stout as well as the spice palette and the heat at the end.  I’ll cut to the chase – I’m still a BOMB! fan.  The good people at Prairie didn’t do anything to change my mind and more probably reinforced their genius – at least in my opinion!

I took out my bottle of Christmas BOMB! and let it set out for an hour to warm a bit.  As you can see, it poured a nice black with a small liner of a foamy head that dissipated 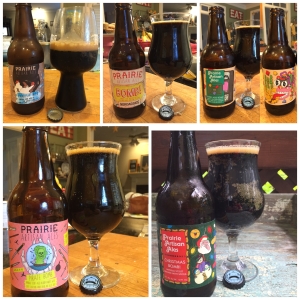 quickly.  The aromas brought me back to the first Christmas BOMB! I had back during the holidays….a good strong whiff of spices.  The first sip was nice and thick and I knew then I was enjoying a BOMB!  The Stout coated my tongue and the aftertaste had a bit of heat to it, another telltale sign of BOMB!  The spices added a layer of complexity to this already complex Stout.   This is a great Stout for those who like to have their taste buds bombarded!  As I
neared the bottom of my glass, I thought back to the other BOMB!s that I have had the pleasure of tasting and realized that Prairie has quite the BOMB! lineup!  Truth be told, however, I do believe Pirate BOMB! is the best of the lot (at least of the lot that I’ve had the privilege of tasting!).  I really commend the creativity and innovation of the brew team at Prairie.  I hope to be lucky enough to taste a Birthday BOMB! and see how the caramel impacts the overall flavor.   Happy Birthday BOMB!

Stout of this World rating: 4.25 bombers