Epic Brewing is best known in the Stout world for Big Bad Baptist,  a 12%ABV Bourbon barrel-aged Stout that has a large legion of followers (now including me!).  Based in Salt 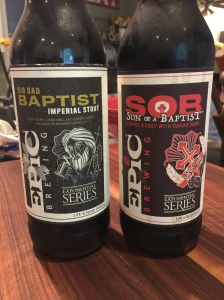 Lake City, Utah,  Epic is in the midst of one of the more ambitious brewing projects I have seen in quite a while.   The Epic team is releasing not 1, not 2, but 14 variations of Son of a Baptist, a non-barrel aged relative of BBB.  The brains behind the brew at Epic is also a coffee lover, so a request went out to find coffee roasters that would be willing to collaborate on small batches of Stout.  The request was to submit beans that would enhance the flavor profile of a Stout.   They selected 14 roasters and made 14 different versions of Son of a Baptist.   Roasters from California to Virginia, Michigan to Texas made the cut….and so did a local Raleigh, North Carolina roaster, Larry’s Coffee!  Larry’s Coffee is a socially and environmentally responsible coffee roaster based in Raleigh.  They roast some amazing coffee and they clearly have fun doing it!  I went on a tour of their facility about 5 years ago and have been a fan (and consumer) ever since.  I especially like their cold brew offering!

To celebrate the occasion, Epic hosted a release party last week at Pharmacy Bottle + Beverage in Cary, NC where the Larry’s Coffee version was introduced for the first time! James from Epic was the host for the release party and he did a great job sharing stories about Son of a Baptist as well as offering some samples of upcoming summer brews from Epic! 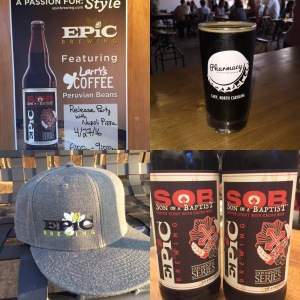 Peter and Ryan from Larry’s Coffee were there to answer questions and they also had the Peruvian coffee that was used in the beer available to sample as brewed coffee!  Neat touch!  Peter told me that they selected the Peruvian coffee beans for their chocolate notes and the way it would compliment the malts in the Stout. They were right on, as my review will attest.  Pharmacy was very crowded on Wednesday evening and as I looked around, I saw many of the patrons with a glass of Son of a Baptist in their hand!   Hats off to James, Peter, Ryan, and the Pharmacy team!

The good people at Epic (thanks, Matthew!) graciously sent me a sample of Son of a Baptist made with coffee from Portola Coffee Lab in Southern California.  Portola’s Terra Incognita espresso blend was selected for their version of SoB.  This blend is comprised of Ethiopian Harrar and Colombian Cauca beans.   I find it quite amazing how the flavors of Stout beer change and evolve depending on the coffee bean used…and I assume that’s what the Epic Brewmaster was going for, so mission accomplished!

On to the Epic reviews!!

April 30, 2016 – I’ve had this bottle in my beer cellar for about 6 months now. I’m not altogether sure what I was waiting for but with the release of Son of a Baptist, I thought it was high time to break this Bourbon barrel-aged Big Bad boy open and see if all of the positive online reviews are merited.  Epic makes BBB in various “releases” using different dark roasted coffee; I had the privilege of tasting release #61, which was brewed with Caffe Ibis coffee in February, 2015 and packed in October, 2015. This release came in at 12.1%ABV and is bottled in a 22oz. bomber. 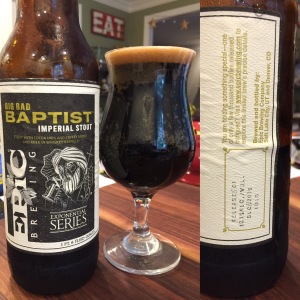 After taking it out of the fridge and letting it sit for an hour to bring it to around 50-55 degrees, I opened it and let it pour. It BBB was a beautiful jet black with a nice foamy head. Once the photo opp was over, I lifted the glass to my nose and was bombarded with some amazing aromas.   Usually there is one scent that dominates and overwhelms; Big Bad Baptist provided me with equal notes of coffee, chocolate, and bourbon! Each aroma was incredibly layered and I could detect each scent, which I must say is a first from all of my tastings.   Either my nose is better at differentiating scents or this is foreshadowing what’s to come.

My first sip confirmed it – this is a Stout that is smooth, balanced, and complex! I could taste the coffee blended with the chocolate, along with the slight booziness of the bourbon. The mouthfeel was medium and the aftertaste was smooth. As I continued my taste journey, I marveled at the attention to detail that is required to get this Stout so balanced and smooth.   This is a Stout that deserves every bit of recognition and praise that it gets!  I enjoyed every single sip of Big Bad Baptist and it delivered that smooth, balanced taste all the way to the bottom of the glass!!  Kudos to the Epic Brewmaster!

I guarantee that Big Bad Baptist will always have a place in my Stout House and that is one of the highest compliments I can pay a Stout!

Stout of this World rating: 4.5 bombers

May 1, 2016 – Coming off of my Big Bad Baptist experience the day before, I had to reset my expectations for Son of a Baptist.  Son of a Baptist is a relative of BBB in that it is the same base Stout but with two significant differences: Son is not Bourbon barrel-aged and that Son has about 14 variants.  Epic was able to partner with about 14 different coffee roasters across the country and used their recommended beans to create Stouts such that each variation has a different flavor profile.  The outcome shows how different coffee beans can influence the ultimate flavor of the Stout.  Pretty unique and an incredible labor of love!  It must have been quite a job first to source out different coffee roasters then brew different batches highlighting the flavors and notes from the coffee!

I was able to taste the Larry’s Coffee version at the release party last Wednesday.  I found it to be quite good and thought the coffee was very complementary to the Stout and it 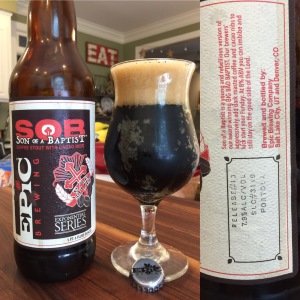 worked well!  I was hoping for a similar experience when I opened a bottle of Son using coffee from Portola Coffee Lab, a Southern California roaster. This version clocked in at 7.9%ABV in its 22oz. bomber.

As with BBB, I took Son out of the fridge and let it sit for an hour before I opened it. The pour was similar to Big Bad Baptist as it was a jet black pour and a nice foamy head that hung in there for quite some time. The aroma was pure coffee – didn’t get any chocolate scent in Son.   The first sip was quite tasty, with some nice coffee notes, not overwhelming with a medium mouthfeel. The aftertaste was smooth and went down easy. Subsequent tastes mirrored the first with the only difference was that as it warmed, the mouthfeel got a bit thicker – which I like – though it never got to the “tongue coating” stage.

I really enjoyed Son of a Baptist – I appreciate the creativity and effort the Epic Brewing team put forth in this “series” of a single Stout.   With the lower ABV, I could easily see myself savoring this on a summer evening.

Current plans call for Epic to release these variations in 12oz. cans later this year – great idea!  One recommendation would be to take a page from the Terrapin playbook and release mixed 4 packs, so we can taste and sample the differences across the various coffees.  I’m happy to support Larry’s Coffee as my local roaster, but tasting the different flavor profiles is a good way to showcase the Son of a Baptist series!

Stout of this World rating: 4.0 bombers