Another St. Patrick’s Day has come and gone.  If you could get past the wall to wall Guinness advertisements from “How to pour the perfect pint” to #GuinnessTache to their own @Untappd badge and wrapping up with their #stoutmoji campaign (which I happen to support by the way!) – I think that just about every craft brewery tapped their own version of a dry Irish Stout.  Not that it’s necessarily a bad thing, but to me St. Patrick’s Day is always bittersweet.  In my mind, March 17 signals the end of Stout season.  Yes, I know that the nationwide release of Founders KBS is in early April, but for the most part, we’re moving into the Spring/Summer rotation of IPAs, DIPAs, and Lagers.

If you are a Stout guy like me, you’ve been replenishing your beer fridge for the stout drought of Spring and Summer and buying those stouts you want to enjoy after a hard day at the office or on holiday at the beach (love those canned stouts!).    I know my beer fridge is bursting at the seams so I think I’m ready for the off-season, but I’m also aging a number of bottles for enjoyment in a year or so.

One downside that I experienced on March 17- I had a bottle of Guinness that I opened up to enjoy before the traditional Irish meal of Corned Beef and Cabbage (prepared by Mrs. Stoutwhisperer!).  I knew something was amiss when it didn’t smell right and there was no head to the pour.  A few sips and I knew it wasn’t right, so I participated in the rare but well-known tactic of the “Drain Pour”.  Too bad, but life is too short and my inventory is too large to suffer through a bad beer.   Not sure what happened, but don’t worry Guinness, I’ll be back!

My replacement choice was somewhat odd – Hitachino Nest Espresso Stout!   See below for my review of that beer and my others from the weekend!   All in all, it was a very enjoyable Stout weekend!  Hope you enjoyed St. Patrick’s Day and are thinking ahead on how you will make it through the impending Stout Drought!

I’ve heard about this Japanese brewery for a awhile and when I saw their lineup of beers at a local bottleshop, I knew I had to give one a try.  Espresso Stout called my name and so I bit.  It was a stubby bottle containing 11.2 oz (?) of a 7%ABV jet black beer.  It was a nice pour with a nice creamy head.  As you can see, since the bottle is only 11.2 ounces, it doesn’t quite

reach the top of the glass.   The aroma was coffee.   The first sip was smooth and was all about the coffee.  The mouthfeel was thin to average which was expected based on the pour.  Subsequent sips repeated the first one – basically this is a stout that give you a shot of espresso with each taste.  It’s a no nonsense, straight on coffee stout.  Personally, I like coffee stouts but I also believe that you can have too much of a good thing and that’s why I came to appreciate the 11.2 oz. bottle.  I finished the bottle right before I think I would have gone into coffee taste overload.  If coffee stouts are your go to beer, then I highly recommend Espresso Stout.   I probably would buy it if I saw it again, but it’s not one I would seek out.

Stout of this World rating: 3.75 bombers

From previous ratings of PAA BOMB! and it’s variants, you know I’m a fan.  When I read that Pirate BOMB! was on the release schedule, I was hooked.  BOMB! in Rum Barrels?  Really?  So when it started appearing locally in bottleshops, I was on social media alert and 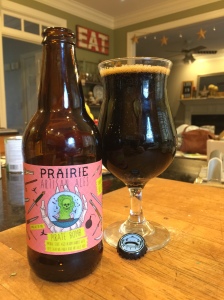 fortunately, luck was on my side when I saw a posting from my friends at House of Hops in Raleigh, NC (@HouseofHops1) and just happened to be in the area.  I was able to pick up a few bottles and it moved to the top of my review list.

It poured like all BOMB!s do…jet black with little head.  There was a nice aroma….I could smell the rum as well as the BOMB! spices.  The first sip just wrapped around my tongue and the rum barrel aging added some kick to the BOMB! but not as much as the Bourbon barrel aged BOMB! The taste was just about perfect……this clocks in at 14% ABV, so it’s a warm one, but it’s one of the best BOMB!s I’ve had!  I’m glad I bought more than one, because I know I’ll want to confirm how good this was a couple more times!!  To my friends at Prairie Artisan Ales, keep doing what you are doing!

Stout of this World rating: 4.5 bombers

I’ve had Dark Hollow in my beer fridge for quite some time, and when I was rearranging some bottles, I noticed the cork said “Best by July 2016”.   That meant try it now!  I liked the unique bottle shape and the cork/cage as the gatekeeper to the liquid….now that I popped the cork, how did it taste? 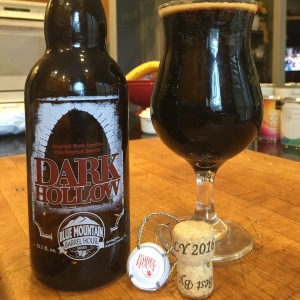 The pour was nice and black, with a very thin line of foam.  I could detect a bourbon in the aroma, but it was pleasant and not overpowering.  The first sip was a nice smooth one – I knew there was some bourbon barrel aging going on, but it was complimentary and really added to the depth of the stout.  Many bourbon barrel aged stouts are bourbon dominant and smooth out over time – perhaps this was what happened here, but it worked!  The mouthfeel was average to thick and the aftertaste was smooth.  As Dark Hollow warmed, the taste became a bit more complex; I really enjoyed this beer to the very last sip!  It clocks in at 10%ABV, but there was a depth and subtlety to this Stout which I didn’t expect!

When I review Stouts, I like to find and sample beers and breweries that aren’t yet “on the radar”.  Dark Hollow and Blue Mountain Barrel House are a perfect example of those wonderful surprises you can find in your Stout journey!  Go find a bottle and pop the cork – I think you’ll like what you taste!!

Stout of this World rating: 4.0 bombers

While I’ve had the pleasure of drinking TENFIDY before, I’ve never put it through it’s paces in a review.  Now it’s time.  Oskar Blues is a brewing concern that has it’s origins in Colorado, expanded to western North Carolina, and is now expanding yet again to Austin, Texas.  They are one of the pioneers in canning craft beer; to be honest, I’m not sure if I’ve ever seen anything bottled from Oskar Blues.  TENFIDY is their stout offering, clocking in at….I’ll bet you can’t guess….yes, it’s 10.5% ABV.  It is a straight forward Imperial Stout; they make a Bourbon Barrel aged TENFIDY, but the BA variant is one of those rare ones that are usually sold

only at the brewery.

Regular TENFIDY is a beautiful sight; it’s an inky jet black pour with a nice tan foamy head that sticks around for awhile.  The aroma is very malty….you know it’s a stout, that’s for sure and after all of the barrel aged beers I’ve tasted lately, a straight malty stout aroma was more than welcome!  The first sip of TENFIDY was nice and smooth.  It has a thicker than average mouthfeel and the aftertaste is pure stout.  As it warmed, it developed more depth and became even smoother than the first few sips.  I began to sense some chocolate and perhaps some toffee notes.    This is an excellent example of an Imperial Stout!  I recommend letting it warm to 50-55 degrees to allow all of the flavor palette to develop and for maximum enjoyment.

TENFIDY is a seasonal release,  so as we start moving into the Stout Drought, it would be worthwhile to go get a 4 pack (or two!) so you can treat yourself during the summer.   Get some now before they sell out for the season!

Stout of this World rating: 4.25 bombers