The good people at Big Boss Brewing invited me to attend their 2016 release party earlier this week. They wanted to share what they have “on tap” for the year with a select group of media and social media people, food industry representatives, and fellow local brewers.   It was a nice low-key event, with US Foods providing the tasty food to accompany the wonderful Big Boss Beer! All of the Big Boss staff was there, answering any and all questions and encouraging us to sample their offerings.

When Mrs. Stoutwhisperer and I walked in, we were offered a good sized sample of Starduster, a single hop Pale Ale brewed with Polaris hops. While not my preferred style, I found it to be a nice, crisp, refreshing beer with a nice tang from the German hops. Mrs. Stoutwhisperer enjoyed it as well and was her beer of choice for the evening.

My mission for the evening was to find out what their Stout plans were for the year – any plans for Aces and Ates? Variants? Barrel aging? Any other Stout offerings?   I must admit that I was totally thrown off my plans when I saw the signage for Root Beer Stout!! I made a beeline for the back where they were pouring samples……leaving Mrs. S in my

wake…..and asked for a full size pour!   The man at the tap, Clay Fussell, sensed my keen interest (I think it was the Stoutwhisperer shirt that I was wearing), poured me a full glass, and proceeded to tell me about the small batch limited run of Root Beer Stout, that it will be sold only in 12oz. bottles, and…………I didn’t quite catch the last part of Clay’s pitch, as I was in awe of the root beer aroma that I was inhaling! It brought me back to my younger days, when the local A&W drive-in sold A&W root beer on tap in frosted mugs….yep, Big Boss captured that Root Beer scent perfectly.   When I started to take my first sip, I was expecting a syrupy sweet root beer – but that’s when I came back to Big Boss Brewing, as the taste was pure stout!   I caught some vanilla notes, perhaps a bit of chocolate in there from the malt, but there was no denying I was drinking a stout. Not a thick, chewy stout, to be sure, as it clocks in at a relatively light 6.75% ABV, so I wasn’t expecting it to coat my tongue!  More on Root Beer Stout a bit later….

Mrs. S and I continued down our self-guided tour, taking a look at the racks of barrels from various wineries and distilleries. I took special note of those barrels what were labeled 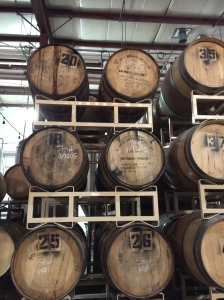 “STOUT” and wondered what their future would hold…..perhaps Bourbon Barrel Aces and Ates???? Sign me up for taste testing any samples!  We also were admiring the two huge Foeders that are being used for their upcoming Strange Cargo lineup (which Big Boss
recently announced via their blog), when Dave Rogers suggested we come on over, as he was going to be pulling some Monkey Bizz-Ness out of one of the barrels for some special sampling.  Monkey Bizz-Ness is a 9%ABV spiced Farmhouse ale aged in red wine barrels.   While the NC Beer Guys did an impromptu Periscope, Brad Wynn and Bobby McInerny talked about the beer and it turned into somewhat of a press conference, as they fielded questions about all of the beers being sampled that evening!  I especially liked the black pepper bite of Monkey Bizz-Ness; Brad mentioned that it needed a bit of balance with the other spices and red wine barrel aging and thought that the black pepper would do it. I think he was spot on! 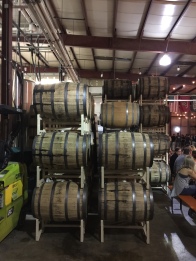 Press conference over, we decided to call it a night. We thanked our hosts and headed home.  A few other notes from the evening:

-All of the Big Boss personnel were engaging and willing to answer any and all questions I threw at them. I know you might say that should be expected as it was a media/industry gathering, but that doesn’t always happen, so all the Big Boss staff should be commended!

-Mrs. Stoutwhisperer commented about how the craft brew business is a labor of love, that it was obvious that the Big Boss staff are committed to their trade and that they really had passion for what they are doing. Couldn’t agree more!

-I’m looking forward to picking up some Root Beer Stout soon. Frankly, I should have had Mrs. S create a scene so I could have grabbed a couple of bottles “to go”….but I’ll take the more common (and legal) route and buy them from one of the local Raleigh bottleshops. Aside from running Root Beer Stout through its paces for a review, I’m really interested in making a Big Boss Root Beer Stout float with a couple scoops of Maple Hill Farm vanilla ice cream!!   Free idea for the Big Boss team……hook up with a local ice cream partner and have a Root Beer Stout float party!!

-Lastly, many thanks to Big Boss for putting this together.   While my quest for good Stout knows no boundaries or borders, I prefer to stick close to home and support the local craft beer scene. Events like this help me get to know the “people behind the label” and make me better understand and appreciate the hard work and long hours our local craft brewers put in to give us the best product they can make!